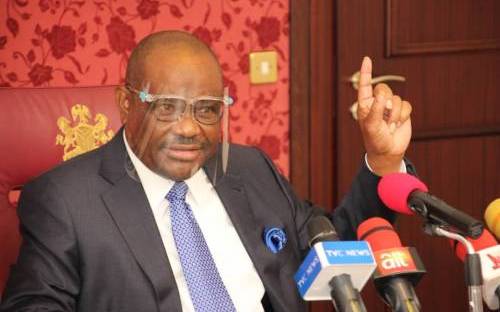 Chairman of the Peoples Democratic Party Campaign Council for the Edo State governorship election, Nyesom Wike, has said threats by his counterpart in the All Progressives Congress, Abdullahi Ganduje, to “isolate” him until the elections were over, had exposed the plot by the ruling party to take undue advantage of security agents.

Ganduje had on Monday said the APC will humiliate Governor Godwin Obaseki of Edo State by isolating Wike.

Reacting on Tuesday, Wike said it is the man, who pocketed dollars that deserves to be isolated.

He said the Kano State governor was not his match, saying “Between me and a man who has been caught pocketing dollars, who deserves to be isolated?”

The Independent National Electoral Commission has fixed September 19 for the Edo election.

Osagie Ize-Iyamu of the APC will be up against Obaseki, incumbent governor and candidate of the PDP, in the election.