There are speculations that President Muhamadu Buhari is getting married to a second wife and the wedding is set to hold on Friday, 11th of October.

According to sources in Aso Rock, President Buhari is getting married in a very quiet ceremony to Sadia Umar Farouq, the current Minister for Humanitarian Affairs Disaster Management on Friday.

Is President Buhari getting married? Is the wedding on Friday?

This might just have confirmed the speculations, especially after concerns were raised by Nigerians over the continued absence of the current First Lady who has gone totally incommunicado since her trip to the UK.

According to a source who spoke to PointBlankNews, on the condition of anonymity, Ms Farouk is a very close friend of Buhari and the Cabals love her

She has been the mastermind behind all the delicious meals Buhari and the Cabal members have been eating especially during political gatherings such as rallies and campaigns.

The source also revealed how Buhari enjoys getting massaged by Sadia who is known to be skilled in the art of massage, stating this as the reason Aisha Buhari who runs a Cosmetic business, was forced to include massage services recently to regain the heart of her husband.

Aisha Buhari was said to have discovered President Buhari’s relationship with Sadia Farouq, she kicked heavily against it. She allegedly made confrontations with her husband and pleaded with him to stop but it has fallen on deaf ears. Even his uncle, Mamma Daura has allegedly told her to accept her faith.

According to the PointBlankNews source, the Cabals felt Aisha Buhari could not be trusted, being a native of Adamawa which is not a core Muslim state. Sadia on the other hand is from Zamfara state. 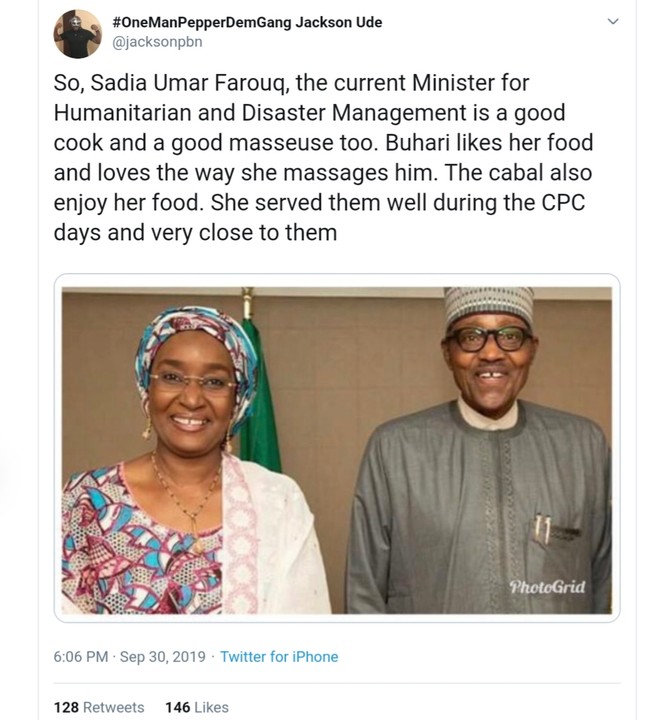